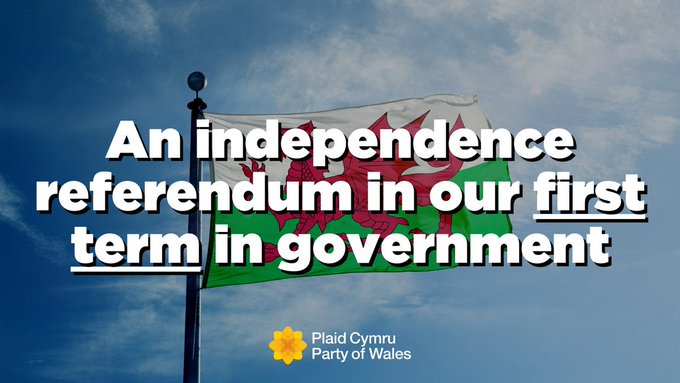 'A vote for Plaid Cymru will secure a referendum on independence'

A Plaid Cymru Government – able to command the support of a majority of Senedd members - will offer a referendum on independence for Wales in its first term, party Leader Adam Price will say today.

The Plaid Cymru Leader will make the announcement in a keynote address on Welsh independence at 9.30 am, live from the St David's Hotel in Cardiff.

Plaid Cymru Leader Adam Price will say that devolution is "under attack" from the Conservative Westminster Government and that with Scotland likely to become independent by 2025 and Brexit making a united Ireland possible, the "momentum of change" has accelerated the need to hold a referendum on Welsh independence by 2026.

Mr Price, the only prospective pro-independence candidate to become First Minister will be responding to the report published by the arms-length Independence Commission in September. It had suggested holding two independence referenda within a decade - the first one exploratory to gauge people's views in order to persuade the UK Government to hold a binary referendum.

Noting that support for independence was at its "highest" in history, the Plaid Cymru Leader will also confirm that a Plaid Cymru Government would offer one binary choice referendum on Welsh independence and will encourage all those who want independence for Wales to vote for Plaid Cymru in May.

"Devolution itself – that most basic democratic principle that decisions affecting Wales should be made in Wales - is under attack from Boris Johnson's Conservatives. Meanwhile, the demand for another independence referendum in Scotland is becoming unstoppable and by 2025 Scotland could well be an independent country.  And Brexit has also given further impetus to the calls for a united Ireland.

"that Wales is in real danger of being be left behind as part of a rump United Kingdom, in a new England-and-Wales formation – which would be the ultimate worst of all worlds.

"It is for these reasons that I therefore pledge today that subject to party approval a Plaid Cymru Government, able to command a majority in the Senedd, will offer a referendum on independence for Wales in its first term.

"It's implicit in the present Covid crisis - the sense that something new and better must come out of this.  Next May, electors won't just want to carry on with the Old Wales. They will be looking for a new direction, one that offers hope, vision, and ambition. It is our job in Plaid Cymru to provide that hope, that vision, that ambition for real, radical change.

"Independence is the most radical idea in Welsh politics today. The last two polls on independence put it on its highest support in history.  An argument once derided as a pipe dream has moved from the margins to the mainstream.

"But whilst banners and marches fuel our fire, the Welsh spring will only truly bloom at the ballot box in May. If you want independence, you have to vote for it by voting Plaid Cymru."