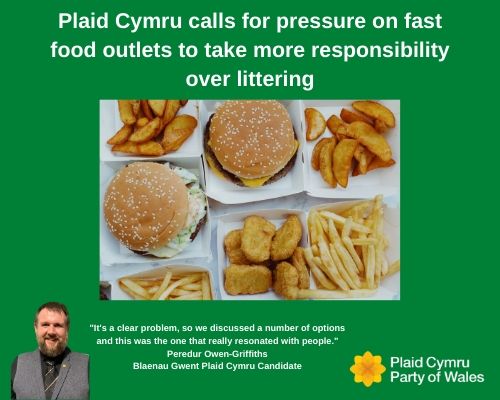 Launched on 4 June by Plaid Cymru Blaenau Gwent, the petition calls for the government to make it compulsory for fast food outlets with drive through facilities to print car number plates on all packaging so that litter can be traced.

The petition notes that since fast food outlets reopened in Wales on 2 June, there has been a substantial increase in the amount of litter in communities across Wales.

The petition was thought up Peredur Owen-Griffiths, Plaid Cymru Senedd candidate for Blaenau Gwent who got frustrated by the amounts of rubbish from fast food outlets appearing locally every day since the outlets reopened.

Plaid Cymru MS and Shadow Minister for the Environment and Rural Affairs, Llyr Gruffydd, called the petition’s call an “innovative suggestion”, and said that he himself has received a number of emails from his constituents in north Wales concerned about the increase in littering since these establishments reopened.

"The idea came after talking to a number of constituents in the Ebbw Vale and Brynmawr area, who say they are completely fed up with the amounts rubbish being left here.

"A lot of good work has been done to clear it up over the last few weeks, but as many feared, no sooner had the drive-thrus opened up than the increase of litter started to be noticed again.

"It's a clear problem, so we discussed a number of options and this was the one that really resonated with people.

"Our thinking is if you can print the registration number on tickets for car parks, then there's no reason something similar couldn't happen when you go to a drive-thru.

"We really do think that with the number printed across the packaging the accountability would be much greater, hopefully having an impact in reducing the amount of rubbish left on the side of the road.

"The potential legalities and enforcement of this scheme are still being talked through and figured out, but the technology seems to be there, and we're eager to make use of it to discourage littering."

“The recent increase in littering across Wales has been a concern and a point of frustration for many people across Wales, including for many of my own constituents. It seems that fast food and littering tends to go hand in hand, and we need long term solutions to tackling this issue.

“One innovative suggestion being pursued in a petition by a Plaid Cymru branch is that fast food outlets print customer number plates on packaging in order to discourage littering. This is exactly the kind of creative thinking we need to start a wider discussion about how both businesses and consumers can take greater responsibility for preventing litter.

“We do need to remember however that fundamentally, the fast food outlets themselves have to do more to reduce their impact on the environment, and should rapidly move towards environmentally friendly alternatives, such as compostable or bio-degradable packaging. Some are already going in that direction but we need a step change in pace.

“That’s why Plaid Cymru supports proposals such as placing greater duty of responsibility on those producing waste, introducing deposit return schemes and legislating to remove all single use plastic by 2030.”