As the son of a minister, I had already lived in many different parts of Wales by the time I went to secondary school. From being welcomed into the rural community of Pumsaint in Carmarthenshire, to watching the lifeboats battle the wild seas of Moelfre in Ynys Môn, to working with a vet all across the farmlands of the Vale of Clwyd and Flintshire – Wales is my home.

That’s not to say I’ve never been out of Wales. I studied for a Masters degree in Engineering at the University of Sheffield, and watched with interest as this former titan of industry – the Steel City – benefitted from urban and economic regeneration schemes to give it its place as a major player in banking and insurance in a post-industrial era. I wonder if this subconsciously influenced an early career decision - as a student I had a job in banking, and after completing my degree, was fast-tracked into being a Bank Manager for Santander, and I was also able to move back to Wales to complete my training.

Whilst with Santander I worked in branches across south Wales, including Newport, Monmouth, Caerphilly, Merthyr Tydfil, Blackwood, Cwmbran, Barry, Tonypandy, and Cardiff.

Working in a bank in a centre of a town, you really get a feel for the local community. But more than that – you realise the importance of the town centre in shaping that community. Towns that suffer from a major bank leaving, or shops closing – it has a real and negative impact on the community that surrounds it. It’s more than just jobs, it’s that focal point for the town, the place to go to on the weekend, the sense of pride. But more on this later.

It was just before I moved to Sheffield that we – the Welsh public – voted for devolution and something shifted in me then. Up to that point, I knew I was Welsh – of course I was Welsh. Perhaps it was all I knew. But seeing something stirring in the country awoke me to the possibility of a different world where Wales had more say in its own internal running, and perhaps it set in motion a train of thought that would eventually lead for me to consider my role in this. Leaving Wales for Sheffield and having that perspective from outside only increased my pride in my country and my desire to move back and contribute.

Loving Wales as I do, I guess it was no surprise that following Santander, my next move was to join Principality Building Society, the largest of the Welsh building societies. There, I worked all over Wales, in the mortgage sector, in the role of both broker and lender and this gave me a really important insight into the Welsh housing sector.

After 13 years in the Financial Sector, it was time for a change and in 2015 I joined Christian Aid as Regional Coordinator for South Wales and Legacy Officer for Wales as a whole. During this time I joined the Board of Directors for Displaced People in Action, a charity working to place refugees. Looking back, I realise that this was born out of a need to give something back, but what I gained from these roles I’ll always be thankful for. I’ve been humbled by people I’ve met in some of the poorest parts of the world – who have gently explained that while the world sees them as poor in financial terms, they are rich in spirit. All over the world, the creation of jobs solves many issues. When people have a place in their community, a role to play, a job to do, it benefits everyone around them.

My current role is with Cytûn: Churches together in Wales, and it’s been great working with the many faith groups across Wales. From helping places of worship make sense of the changing regulatory landscape of 2020, to helping different committees run smoothly, to the inter-faith work – I’ve got to know many different communities in Wales.

Anyone who meets me would describe me as a “people person” – and what drives me is bringing together different people, helping them find common ground to achieve a goal. You may not be surprised to hear that I even enjoy committee meetings!

In case you don’t believe me, in my spare time, I am also the Chair of the International Choral Festival Wales, which has been welcoming choirs from all over the world here to our land of song for the last 3 years. This year, of course, we had to take a break and I very much miss the choral world. I’m also a member of Côr CF1, an internationally acclaimed choir based in Cardiff. In non-covid times, we would perform and compete in Wales and further afield; regularly winning at Eisteddfodau and more, and in 2014 we won BBC Choir of the Year.

That coming together for a common cause – be that a choir singing together, a faith group worshipping together, or a political party rallying together under one banner – is something I’ve very much missed during the pandemic. The next goal for me is the Senedd Elections in 2021, when I hope to be elected to represent you. It makes me very sad to see the decimation of the industries across much of south Wales. If we can get that right, if we can create jobs right in the heart of our towns, if we can bring back those thriving town centres, those hubs of the community, then so many other things will fall into place.

As JFK once said “ask not what your country can do for you, but what you can do for your country” – I think we need to start closer to home by asking what we can do together, for each other, in the communities across Blaenau Gwent. If we believe in ourselves and in each other, there is no limit to what we can achieve. A Plaid Cymru Government is what is needed now for Wales and it’s so important that dynamic candidates like me get your vote in May. I believe I’ve got the skills, the work ethic, and experience to represent you. That is why I am asking you to lend me your support. 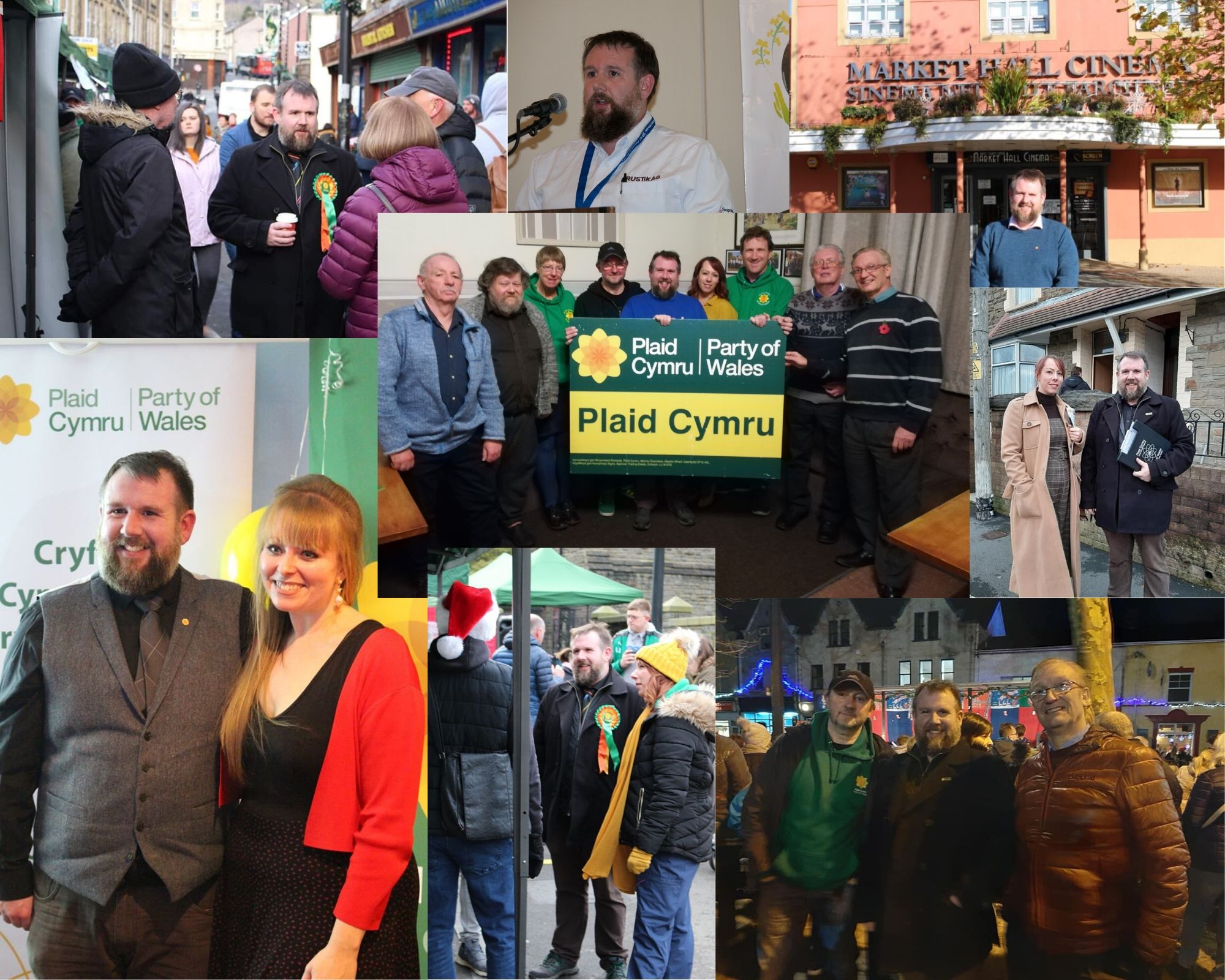