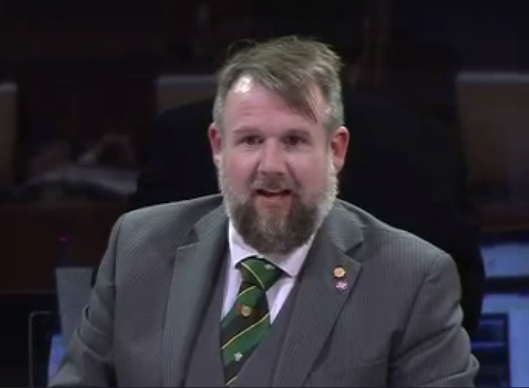 A Plaid Cymru Member of the Senedd has called for a greater focus on helping people with dementia.

Peredur was speaking during a Plaid Cymru debate about health inequalities which called for a strategy and action plan to tackle health inequalities in Wales which existed before coronavirus but have only been exacerbated in the last two years. Labour members voted against the proposal.

During his speech, Peredur said: “I wish to mention dementia. As the Plaid Cymru spokesperson for older people, this is an issue that is close to my heart.

“The rights of people with dementia have also been in the news in recent days, thanks to my Plaid Cymru colleague, Liz Saville Roberts.

“She spoke passionately in the House of Commons about the need to end the isolation and separation of people with dementia in care homes and hospitals. As Liz herself said: 'The Welsh Government has a respectable policy text in place with our dementia action plan for Wales 2018-2022. But there is a yawning chasm of a gap between what it describes and the reality of what is happening in our hospitals and care homes, in both Wales and England.'

“There should be more awareness that an individual's risk of developing dementia can be significantly determined by a number of factors.

“Health inequalities have become a vital component as we learn more about the potential for reducing the possibility of developing dementia.

“Consideration of health inequalities should feed into dementia care plans, as well as dementia risk reduction, and I would like to hear from the Government today how that is happening in the here and now.”

Peredur also spoke about the benefits that Plaid Cymru’s influence in the co-operation agreement will have on tackling poverty in our communities.

He said: “The Welsh food poverty network noted in 2020 that not having enough money to reach affordable food shops or access a nutritionally balanced diet is now a common reality for many people in Wales.

“This is why I'm proud that Plaid Cymru has secured free school meals for all primary school children as part of the co-operation agreement.

“The security of a decent nutritious meal made with local produce for all young children in Wales will go some way to reducing the health inequalities associated with food and dietary practices.”